skip to main | skip to sidebar

I want to write and I don't know about what yet. Gary and I went up to Gold Hill to see his land on Monday. The debris from the fire had been removed and the foundation had been dug up. Two giant dumpsters contained all that was left of the house and the life he had for 35 years. During the five and a half years that he lived in Gold Hill when we were together I had a lot of resistence to being up there. The drive was long and difficult and the last twenty minutes was ungrated dirt. When I got to the dirt I was always impatient, ready to be there. Our arrangement was that Gary spent weekends in Denver in the winter and I spent weekends in Gold Hill the rest of the time. I think he had an even harder time coming to Denver than I did to Gold Hill. He hated diving in traffic as much as I was challenged with mountain driving. There were things I appreciated about being up at Gary's house. The main thing I valued was being immersed in nature. It was peaceful and beautiful and we often had families of deer for neighbors.
My favorite thing to do was to hike on the land across the road from his house. I so appreciated stepping out of his door and being able to hike in a spectacularly lush forest. There were also meadows full of colorful flowers and almost always no other people. I began to do the hike myself sometimes. After I got over my fear of getting lost by getting lost and finding my way it became a great pleasure to go by myself. My landmark were two huge trees joined together near their base. I knew if I headed in their direction I would find my way home. It was the perfect hike on those days when I felt like I would jump out of my skin if I didn't move my body around and Gary didn't want to go. The hike led up to a rock outcropping with a peak mountain view beyond the beautiful trees. Many birds would come to roost in those trees. Although I mostly couldn't hear their songs I enjoyed sharing their company.
Monday we went up to the land because Gary hadn't seen it since it was leveled. I wanted to go with him to support him. A lot of sadness anger and grief came up for him. There was something so final about the level dirt where the house had been. We went for a walk to the crow's nest which was what we calledf the rock outcropping at the top of the hike. I think we had both fantasized about coming up to the land and hiking there in the future and maybe sharing it with Gary's kids and grandkids again.
The land bore the scars of the fire. One whole side of the mountain was all dead charred trees. As we walked Gary noticed our landmark trees were no longer there. They had burned down to a charred hole with burnt tree roots protruding from it. The devastation was so widespread and stark, more than either one of us had imagined. We did see a small grove of aspen saplings beginning to grow, which was very hopeful and inspiring. We could feel the power of mother nature both to create and to destroy. When we got back to our lovely home I felt a flood of gratefulness that our owning my dream home was made possible by the fire. We had found a place that satisfied Gary's need to be in the mountains, both of our love of nature, and my need to be close to a health food grocery store and a yoga studio. Gary had recently found a plot map of our area that a real estate agent had included in the flier on a nearby home for sale. We had never known the exact boundaries of our land so we came home and walked the boundaries of our land. There was something so healing for me to walk on unscorched earth and to feel the green grasses rustling against my legs. Everything felt so alive and reassuringly whole. It brings to mind ganesh, the hindu elephant god who is the creator and remover of obstacles. I guess obstacles have to be created to be removed. Someday I'd like to be able to appreciate both. I am in the process of integrating our visit to the land yesterday. Writing this blog has helped me to do that. Thanks for listening. Andrea
Posted by Andrea Silver, LCSW at 6:34 PM No comments:

It's been a while. Gary and I just returned from a week in Breckenridge. The leaves were amazing and we got along really well most of the time. I am actually starting to experience what it's like to accept my partner as he is. That doesn't mean I have to like everything about him. I certainly don't like everything about myself either. I used to say that being in a committed relationship meant liking another person's pleasing qualities enough to be willing to gag down their other stuff. Gary would look at me archly and say, "Gag down?" He was on to this acceptance thing way before me. I think one of the things I love about him the most is how accepting he is of me. This quality helps me to feel safe with him and also has taught me to be more accepting of myself. Gary brings lots of non-judgemental acceptance into our partership. I bring lots of motivation to change and grow. When I get impatient with how slow he moves when we are hiking, I remind myself that I have found a partner who loves the mountains as much as I do. I move ahead honoring my own pace, coming back to say hi often.
On our trip he got pissed at me because he wanted to lead the way down a tricky trail that he had done before and I wanted to go ahead of him and go faster. He said I was controlling and I hate that. Being controlling is one of my least attractive qualities and I especially hate having my being controlling pointed out by another. I proceeded to get really angry defending myself and telling him that I wanted to go at my own pace and he was impeding me with his need to go first.
Then I pushed ahead and slipped, landing on my previously injured wrist. Visions of repeating six more months of physical therapy and teaching yoga with no down dogs floated through my mind. I still held on to my defensiveness and he got triggered too. Soon we were in a beautiful place, oblivious to the present moment, caught up in both being right. It made things worse that three other hikers had come along to witness our raised voices. (well mostly mine) He tried to reconnect and I was still attached to feeling separate. We hiked back up and I asked for help to let go of my ego's strong desire to off him on the spot. I breathed and asked for help to feel the universe holding me and the little girl inside me (who sometimes goes apeshit when I am criticized) in love for being exactly as I am. That included being controlling, defensive, and mean- a tall order. We were walking through a magnificent forest of golden aspen trees and slowly I began to see them. This is one of the reasons why I love nature so much. Self-acceptance is much easier for me to experience if I am in a beautiful natural place. Gradually
I opened to the ego trance I was in where Gary looks like my enemy, and held myself in love.
This was powerful for me to realize how deeply caught I was and to acknowledge this to Gary.
Being vulnerable with him opened my heart and I was able to feel love for myself and for him.
I am grateful to be with a man who is willing to work on our relationship. We both acknowledged our unskillfulness and began to reconnect. It's hard for me to accept how angry and threatened I get. Even though I know that relationship as a spiritual path means using everything that comes up to get closer it's hard to include those qualities that I least accept in myself as teachers. And teachers they are. I am grateful to be on this journey toward self-acceptance and acceptance of Gary even though sometimes it is anything but pretty. I so appreciate sharing my path with a man who values my healing, his own healing, and our healing. I am grateful to you for listening to this. I hope it contributes to you and to your process of self-acceptance.
Posted by Andrea Silver, LCSW at 7:16 PM No comments: 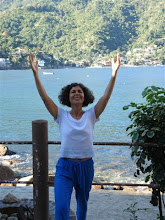 Andrea Silver, LCSW
Denver, Colorado, United States
Welcome! I hope you enjoy my blog and learn something about yourself when you read it. I am a mentor, a counselor, a yoga teacher and a laughter yoga leader. In my work I guide you in opening to the fullest expression of all that you are in mind, body, life and spirit. My purpose is to share love, joy and laughter with the world. I can be reached at andrea@andreasilver.net. My website is www.andreasilver.net